Capitalism: From its Genesis to its Eschatology: Its Compatibilities with Christianity, Its Insidious Challenges to Godliness

This essay begins with a discussion of what ails all economic systems. Next, capitalism is defined. This is followed by a look at the Biblical antecedents to capitalism and the Biblical values promoted by this particular economic arrangement. From here the paper will touch on the specific forces that synergistically worked together in the 10th through the 15th centuries to prepare the Western world for capitalism. Next the providential forces of the Renaissance and the Reformation that so deeply impacted the actual rise of capitalism during the 16th through the 18th centuries will be surveyed. Then the 19th century flowering of capitalism that took place primarily in North America amidst an environment permeated with Judaic/Christian values that were broadly accepted at the time as normative, even when disregarded, and that were subsequently overrun by an emerging and ever increasing humanistic set of values that manifested itself in the second half of the 20th century will be outlined. And finally, the eschatology of capitalism will be postulated as occurring when the core values upon which it rests are publicly rejected and its capitalism in name only remnants are dominated by an overarching anti-Christian, governing political force that promotes values that contradict those out of which capitalism arose and flourished. 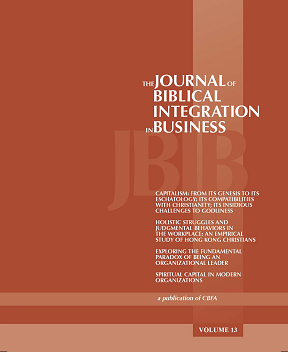